Dynamic weighing or continuous weighingis used to calculate the flow of an uninterrupted stream of material. This continuity of charge constitutes the main difference with the previous modes. Due to the displacement of the load, the weight to be measured constantly varies on the weighing table and the continuous weigher will integrate these variations in weight over time, hence its name of integrating scale. As a corollary, any continuous weighing system measures the weight but also the speed of movement of the product. This is the case, for example, with belt scales, weighing screws or scales called “with conveyor included”. Continuous instruments are defined by their capacity in tonnes / hour (t / h) and their precision which is expressed in relative value and no longer in absolute value. For example: T12 – All-round scale – 900 t / h +/- 1%. The integration of the weight makes it possible to accumulate the past tonnes and explains that a continuous indicator is called Continuous Totalizer. In regulated use, it falls into the category of IPFA.

TELEMETRIX also masters a weighing solution in the case where the conveyor is bidirectional.

COMPONENT OF AN INTEGRATING BELT WEIGHER

Depending on the constraints: belt speed, flow, grain size, precision, the load receptor is made up of 1, 2 or 4 weighing cells. It is important that it is installed in a stable place on the conveyor where the product is at the same speed as the belt.

The speed sensor is an important element when looking for an accuracy better than 1%. Our electronics are able to support 2 speed sensors simultaneously in order to obtain a diagnostic function of the speed sensor (comparison between the two measured speed)

The processing electronics is an important element, it includes a fast calculator integrating the weighing according to the distance traveled. The integrator thus provides the following information:

RECOMMENDATION FOR INSTALLATION OF A BELT WEIGHER 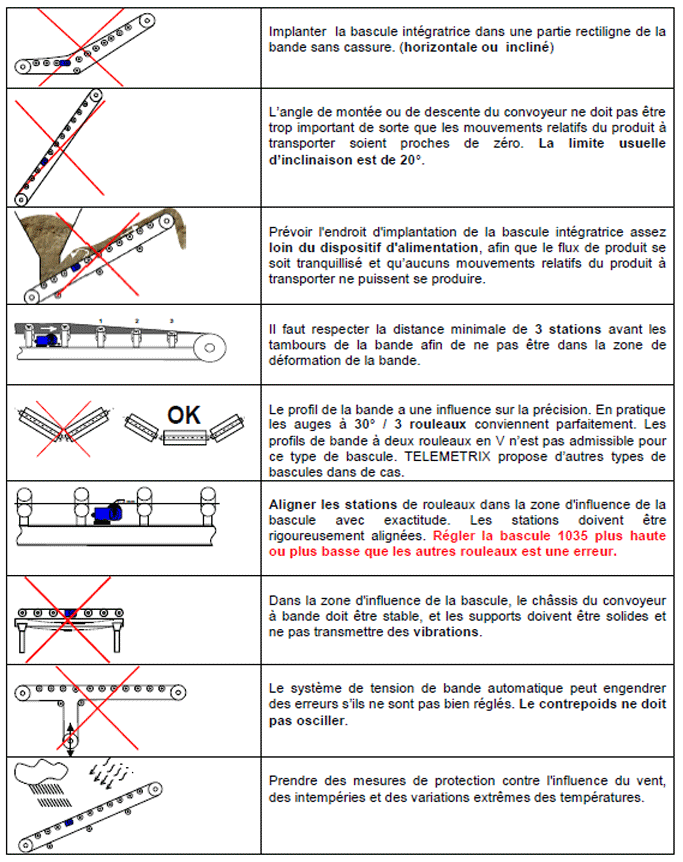